Assessment and highlights of the 2015 report 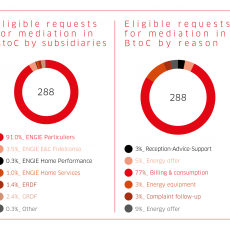 81% of solutions proposed during mediation cases were accepted by the parties and implemented. Furthermore, mediation is a fairly swift and effective process, given that 68% of cases are concluded in under 60 days and 95% in under 90 days (the legal requirement – the order of 20 August 2015 in France ).

Once again this year, most of the requests received concern customers’ comprehension of energy bills, regularization amounts further to incorrect meter readings or adjustments to meter readings further to meter failures. The mediation department has noted the emergence of complaints about new services. This is more particularly the case for services concerning boilers and renewable energies.

On 25 February 2016 ENGIE’s mediation service was approved by the Mediation Assessment and Regulation Commission, the Consumption Mediator and was listed as such on the European Union’s list. A distinction that confirms compliance with all the criteria of independence and efficiency laid down by these new texts. The qualities of ENGIE’s company mediation, inter alia its independence and impartiality, have therefore once again been acknowledged.

After this report was published, the press reacted.

Publication of the Engie mediator’s 2015 report

On 10th June the ENGIE Group’s Mediator Jean-Pierre Hervé submitted his 2015 annual report to Isabelle Kocher, the group’s Chief Executive Officer. He noted a sharp fall in the number of requests (- 40%) “owing to better performance of the customer service”, and a sharp rise in the number of completed mediation cases (50% more than in 2014). “A trend that is accounted for in part by customers’ more exacting standard vis-à-vis their energy provider, against a backdrop of revolution in the sector, with an increasing number of offers and services”, says the press release. The average case processing time was 67 days, in line with the law, which sets a limit of 90 days. Most requests concerned customers’ comprehension of energy bills, but new claims were recorded, relating to new services, in particular those relating to boilers and renewable energies. More than 80% of the opinions delivered during mediation were accepted by the parties and implemented, whereas special cases led the mediator to make 19 recommendations.

>Consult the 2014 assessment and highlights

The recommendations of the ENGIE Group's Mediator in 2015

Further to the various disputes he examines, the ENGIE Group’s Mediator makes recommendations to the ENGIE group entities concerned. These recommendations suggest areas for improvement in the handling of customers and their requests, in procedures and in the services offered. These are set out every year in the Mediator’s annual report. The Mediator then works with these entities to ensure his recommendations are followed through.

In 2015, based on the special cases he dealt with in the year, the Mediator made 19 recommendations. They were discussed with the ENGIE Group business units concerned to ensure their implementation, as well as with consumer organizations.

These recommendations are as follows:

Recommendation no. 1:“Continue improving explanations about consumption adjustment rules when meters are jammed”

Recommendation 2:“Propose a form to be given to the consumer, explaining the procedure further to an accident on the network”

Recommendation 4:“Adjust the amount of compensation paid by ENEDIS (ex-ERDF) according the loss or damage suffered by the claimant”

Recommendation 5:“Refund damaged electrical appliances at their value as new if ENEDIS (ex-ERDF) is found to be liable”

Recommendation 7:“Explain the line ‘adjusted consumption’ on the bill”

Recommendation 9:“Sustain and improve good customer relations when collecting payment for disputed bills, in particular when collection of payments is outsourced”

Recommendation 13:“Improve the process of assessing the financial soundness of partners when contracts are renewed for membership of the ENGIE partners network, and provide customers with support if an ENGIE partner files for bankruptcy”

Recommendation 15:“Improve information intended for stakeholders (tenants and owners of dwellings, managing agents or landlords) regarding the FideloConso offer, and more particularly concerning their responsibilities”

Recommendation 19:“Continue the process of improving the possibility of referring the case to the Mediation service and of satisfying the customer”