The Mediator of the ENGIE Group publishes his 2016 annual report. 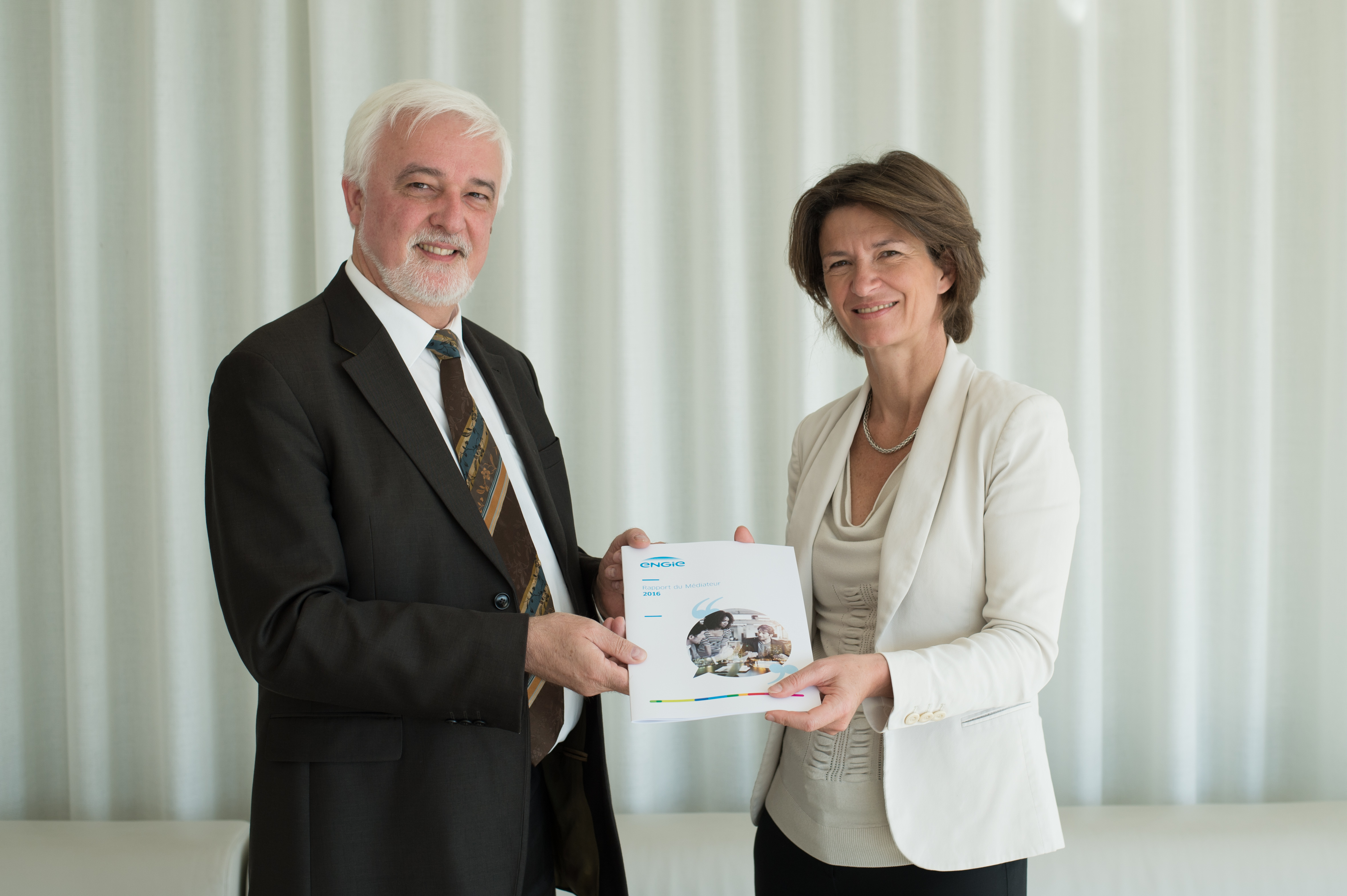 13 Jun The Mediator of the ENGIE Group publishes his 2016 annual report.

“The Mediator’s 2016 annual report. The ENGIE Group’s Mediator has improved the rate of acceptance by the parties of mediation solutions (85%) as well as the satisfaction date of the claimants. This is against a backdrop of increasing numbers of requests.”

As every year, the ENGIE Group’s Mediator has published his annual report. He presented it on the 13th of June 2017 to Isabelle Kocher, the Chief Executive Officer of the ENGIE Group.

Since the 25th February 2016, the independence of the ENGIE Group’s Mediator has been confirmed: he has been approved as “Consumption Mediator” by the Commission d’Evaluation et de Contrôle (CECM) (Mediation Assessment and Control Commission) and his report satisfies the criteria presented in the French Consumer Code (order of 20 August 2015). He is on the list of mediators approved by the European Commission.

This report presents the results of his work in 2016, concerning the 3 main missions he had set himself:

1.Handle disputes admissible for mediation in France, in strict compliance with the Consumer Code (eligibility criteria, process and fulfilment time);

2.Make recommendations to the Group’s business units concerned to contribute to the virtuous circle of improvement on the basis of the opinions put forward, and monitor the effective implementation of the said recommendations;

3.Ensure compliance with the ADR Directive of Group entities operating on the private individuals market (B2C) in Europe, and promote the benefits that other entities would derive from alternative dispute resolution.

Here are the highlights of this report:

Against a backdrop of increasing numbers of cases, the proportion of proposed solutions accepted is constantly growing, as is the rate of satisfaction of the claimants.

85 % of the opinions put forward during mediation cases were accepted by the parties and implemented. Furthermore, mediation is a swift and effective process: the average settlement time for mediation cases was 64 days (the legal requirement – order of 20 August 2015 in France – is to complete them in under 90 days), compared with much longer legal proceedings.

The increase in the number of mediation cases should be correlated with customers’ more exacting demands vis-à-vis their utility company. This phenomenon is all the more sensitive against a backdrop of changes in the energy sector, in which new offers and services are constantly appearing. The ENGIE Group’s Mediation service offers an increasingly pertinent alternative to legal proceedings. This out-of-court dispute resolution method has undeniable advantages for claimants, as their cases are handled free of charge, quickly and with complete independence.

75 % of claimants are satisfied with the Mediator’s intervention (against 70 % in 2015). This improvement in claimant satisfaction is accounted for by the commitment of the Mediation team in unravelling the requests they handle, while claimants continue to have more exacting demands.

The assessment of the agreement signed in 2015 by the national energy mediator and the ENGIE Group’s Mediator is positive on all the criteria: transparency of resolution methods and transfers of cases according to spheres of competence. The complementarity of the 2 systems in France has been confirmed.

Concerning these recommendations, on the basis of special cases he dealt with during the year, the Mediator made 11 recommendations (against 19 in 2015). They were discussed with the ENGIE Group’s business units concerned to ensure their implementation, as well as with consumer organizations. These detailed recommendations are presented on the mediator’s web site :

By prioritizing the BUs to which the Alternative Dispute Resolution (ADR) directive applies, the Mediator contacted the BU managers and customer relations managers and the Legal Department to remind them of the ENGIE Group’s commitments in respect of this directive. As a result, new Group BUs in France have brought themselves into compliance with this policy to offer mediation in addition to or instead of the conventional process legal.

Similarly, in Europe the Mediator has provided support for the European subsidiaries, depending on local conditions and the progress of transposition of the directive in the countries where they operate.

In 2017, the Mediator is primarily pursuing the same goals as in 2016. He will endeavour to pursue his dispute resolution mission in as efficient and optimal a manner as possible to swiftly resolve difficulties experienced by claimants while making sure to deal personally with and satisfy the claimant, while at the same time naturally complying with the law and the principle of fairness dear to him, which underpins successful mediation.

He will also continue providing the Group’s subsidiaries with functional support and guidance to further the widespread adoption of alternative dispute resolution within the ENGIE Group.

Lastly, he will continue to improve his web site to constantly keep claimants better informed of their rights and obligations, and offer advice based on the treatment of past cases (examples of mediation cases, FAQs, guidance, etc.), and whenever possible provide them with additional information to facilitate settlement of their dispute with the business units.